To battle against a fresh gale on one of North Jutland's seemingly endless, shining beaches is to feel the raw force of nature. Gusts this strong, says Villy Hansen, can shift up to three tonnes of sand in 24 hours.

On such days there is reason to be thankful for a nip of one of Villy's home made specials, wild herbs or flowers steeped in vodka, sometimes boosted by the addition of a little extra, flavourless liquor, and sweetened with acacia honey.

Each morning he brings a different bottle, fishing it out of his back pack after we have walked for an hour or so. The first is made with bog myrtle leaves. Next it's bell heather, then Burnet rose hips. We come to think of it as a sort of alcoholic elevenses. 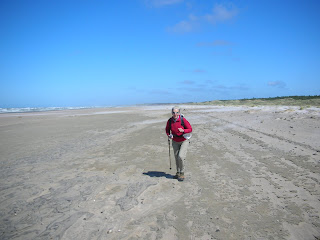 Villy joins us each day to explain the ecology of this curious landscape. Preconceptions of flat and featureless Danish farmland are quickly dispelled. There may be no imposing hills and tumbling streams but there is drama enough in the immense skies and the restless sea which continues to shape and extend the country's northernmost spit at Grenen, where Skagerrak and Kattegat meet, and The waves clash like warriors in close combat.

It is the wind whipped sand which provides the chief fascination: not Blake's single grain in which to see the world – though Villy carries a magnifying glass with which to identify the minerals each represents - but billions of them, which have changed people's lives. 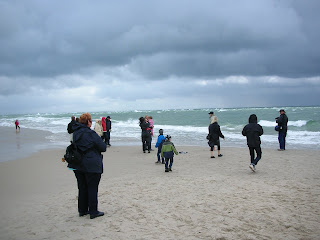 On the first morning we walk through a forest of conifers, planted in the late 19th century to stem the march of dunes and emerge at a curious farmhouse, sole survivor of its kind, with a windmill built into its roof. Once there were dozens of them but excessive use of the land, partly for sheep grazing, allowed the sand to invade. Some families struggled on. One, over eleven generations and on 14 separate occasions, were forced either to slow the progress of the dunes with spades or shift heir home, lock stock and barrel.

At Raabje the little church, built without a tower perhaps to avoid the attention of for fear of seaborne marauders, remains. But the village of 100 or so residents which provided its community, once obliged by law to attend services, is long gone. The stones that built it came from Lubeck, in northern Germany, by sea and then via a system of lakes and rivers since drained. Fish was exported in the opposite direction. In the churchyard is the grave of one Carl Andersen, a local poet who heard one day that his namesake Hans Christian was travelling up the coast. Carl set out in the hope of meeting his hero - but the innkeeper decided he was too undistinguished to be allowed in.

More recently the dunes have been planted with marram grass which, besides halting their progress, makes it easier for the hiker to climb them. They constitute an unexpectedly wild landscape. Cranes have returned to breed on marshy ground around small lagoons, where they may be safe from foxes. Oystercatchers fly up and circle noisily at our approach, warning us from their nests. Red deer browse in the bushes. If you are lucky, you might see a golden eagle.

One evening Villy takes us out in search of nightjars. He hopes they will come close to catch the bugs which plague us but though we hear their calls, like the puttering of mopeds, we see only their dark shapes, flitting briefly between branches. But it is worth being out after dinner to glory in the long light that attracted a school of painters around the start of the last century, whose works are to be seen at the nearby Skagen Museum.

It also provides the opportunity to climb the Raabje Mile free of the company of sightseers who can park their cars at its foot. The Raabje Mile, high point of what Villy calls the Danish desert, is a dune which has been left, for research, in its unhindered state. Eventually, if still unchecked, it will continue eastwards until it cuts one of the main roads and the railway line linking Skagen with the south. 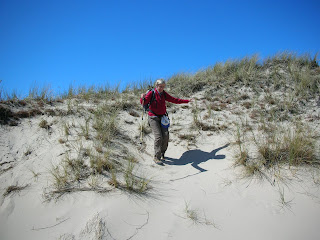 Countless wrecked ships have been washed up on these shores. We find a section of wooden hull, of indeterminate age. Villy shows us spoons from one vessel which foundered some time in the 1900s.

We hike for three days, covering in total between 30 and 40 miles. To make a week of it we spend a night each in the lively university city of Arhus, with its pavement cafes and lovely cathedral, and Aalborg, whose tourist office provides an excellent guide booklet conducting the visitor
on foot around its sites of historical and architectural interest. The rest of the time we spend in Skagen, a busy port and hugely popular resort, walking out to Grenen past huge Second World War German bunkers, some subsiding but largely still intact, whose vanished guns were aimed an preventing enemy access to the Baltic.

Just before ending our walk there we climb the tower which is the only part of the extraordinary Tilsandedekirke still visible. The rest was buried after worshippers, towards the end of the 18th century, wearied of digging their way in and sought royal permission to close the church. 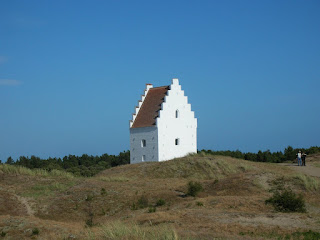 We dine royally on superb fish soup and lemon sole at the Skagen Fish Restaurant – where sand is spread on the floor - and return to the museum, to see how art reflects reality. That special light, bouncing between sea and sky, is unmistakeable. It glows on the faces of Michael Ancher's rugged fishermen, softly bathes PS Kroyer's wife Marie, as she stands at the water's edge. We can now vouch for their inspiration. We, have seen it first hand.

This article originally appeared in Scotland on Sunday's Spectrum magazine
Posted by Roger Bray at 15:37