British Airways is to axe flights from Gatwick to Alicante, Palma, Malta, Madrid, Barcelona and Krakow at the start of its winter schedules. It will also switch services to Pisa, Malaga and Gibraltar from Gatwick to Heathrow. The airline will continue to fly from Heathrow to Madrid and Barcelona. It will now operate to Varna, Bulgaria, only in summer.
Posted by Roger Bray at 13:02 No comments:

Five members of the Star Alliance group of airlines have moved from Terminal 2 to the refurbished Terminal 1 at Heathrow. They are Austrian, Croatia Airlines, Lufthansa, SWISS and TAP. The five join other members Air New Zealand, Asiana, bmi, LOT Polish Airlines, South African Airways, United and US Airways who were already operating from Terminal 1. As part of the switch a common Star Alliance branded check in are - used by Austrian, Croatia Airlines, LOT Polish Airlines, Lufthansa and TAP - has opened.

Despite its economic woes. mainland Greece has polished its tourism act to brilliant effect in recent years. Finding a good hotel, once a lottery with the odds heavily stacked against winning, has become much easier.

A recent trip to the Zagori region, in the north west, and the Pelion peninsula on the east coast proved the point. Both the hotels, which I booked after an internet search, turned out to be gems.

Breakfast, often in the past a meagre affair of Nescafe, melba toast and thin orange juice, was perhaps the most vivid reminder of how much things have improved. At the Papaevangelou, in the Zagori mountain village of Megalo Papigo, along with the ham and local cheese there was a mouthwatering array of conserves made by the owner's mother - among them orange, fig, green tomato, strawberry and raspberry - to go with the bread abd croissants.

At the oddly named Lost Unicorn, in the Pelion village of Tsagarada, you could limit yourself to muesli and the most delicious yoghurt imaginable. But Christos Martzos, who runs the place with his English wife Clare, was close to disappointment if guests turned up the chance of a waist expanding start to the day. He had worked in UK hotel kitchens, and produced perfect scrambled eggs and bacon.

And the coffee at both, far removed from the old "zesto Nes", was excellent.

The Papaevangelou, at the end of a rough track has a magnificent view of the mountains: 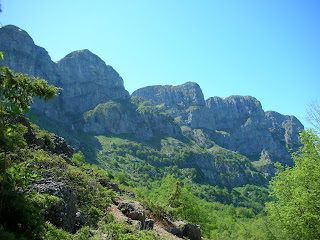 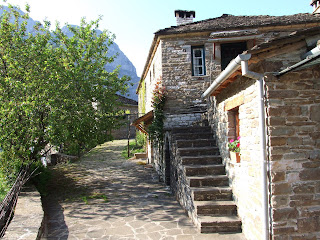 has 10 rooms (doubles range from £55 - £62 in spring, for example, via booking.com)and 4 studios. We had one of the latter, wood beamed and incorporating a small kitchen, which, also in spring, would cost around £95. There are several superb walking routes close by.

The Lost Unicorn, an elegant converted mansion with lovely bedrooms and ab extensive library, also serves dinner (though not on Tuesday or Wednesday night during our stay. Christos' cooking is outstanding - try the Floriana peppers filled with goat's cheese. If it's warm enough you can dine on the terrace, by the village square which is shaded by a plane tree reputed to be 1000 years old or more.

Idyllic beaches, sometimes empty when we visited in mid - May, are a short drive or energetic walk away: 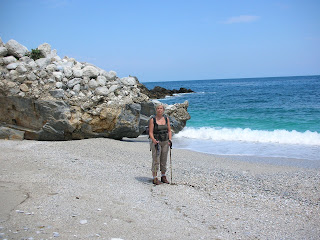 Rates vary according to season, but in summer - outside the school holiday peak - a week's b&b in a double room will cost around £410 at the current exchange rate.

This is not to claim it is now impossible to stumble on a hotel which is less than satisfactory - but it has become much less likely. Both these were blissful. We could find no fault with either.
Posted by Roger Bray at 13:57 No comments:

Walkers fascinated by medieval pilgrimages to Santiago de Compostela are being offered the opportunity to follow the final stages by a UK tour operator.

The eleven day, 100 kilometre hike - with an expert guide - starts in the city of Leon. The operator is Walks Worldwide and costs from £1865, including flights, accommodation and baggage transfer during days on the trail. Departures are on September 4 and October 11.
Posted by Roger Bray at 08:35 No comments:

ATOL protection - airlines must be included

If, as its chief executive Willie Walsh says, British Airways is in "a fight for survival", what possible objection can the airline have to the extension of the air travel financial protection to cover passengers who simply buy scheduled tickets?

Consumers buying package holidays are already protected by the ATOL (air travel organisers' licence) scheme, which ensures they get their money back - or get home without facing additional expense - when companies go bust. BA itself now offers ATOL protection to customers who take up its offer of scheduled flights plus other elements such as hotels, car hire or theatre tickets.

Why not go the full distance and fall in line with those of us who believe the system should be extended to protect all travellers?
Posted by Roger Bray at 09:38 2 comments:

Swingeing planned increases in air passenger duty (APD)* raise an interesting question. Might it prove viable for an airline to offer a single class with extended legroom on long haul flights - on the grounds that standard class attracts the lowest duty?

You may recall that the Government had decided to iron out an earlier, similar anomaly which enabled passengers on business class only carriers to pay the lower charge. This move was quickly rendered unnecessary by the demise of the relevant airlines.

But there would be no need to market extra leg room as a carrot for business travellers. Airlines could just sell it as a superior economy. I don't see anything in the plan which relates duty to seat pitch.

Would this business model work? I don't know. But there should be demand, particularly from passengers currently booking seats in premium economy cabins, who would surely be happier to fork out more for extra leg room than pay the extra APD.