Think twice before ordering or posting lithium batteries and battery-powered devices if they're going top arrive by air. The Civil Aviation Authority says lithium batteries, such as those installed in lap tops or video cameras, rarely pose a safety problem. But there is a danger of fire if they are posted loose or the equipment is inadvertently activated. The CAA has found a growing trend in the transportation of inappropriately packed batteries, partly because of the growth on on line auction sites, which have caused a number of fires. It is also concerned that large numbers of counterfeit batteries, without the necessary inbuilt safety features, are in circulation. The Authority's warning came as part of its pre-Christmas advice which included reminders that matches and lights must not be left in hold baggage and toy gun caps are banned on flights.
Posted by Roger Bray at 10:48 No comments:

Air France is putting its money where its mouth is in the battle against no frills carriers. For a charge of €10 it will allow passengers booking economy tickets on European flights to hold their reservations for ten days. This will enable them to search for a cheaper deal elsewhere. It gets over the problem, encountered by many travellers, of finding a fare that looks attractive, checking what a couple of other carriers are offering - and then finding that the price they looked at first has increased. The French airline will also allow passengers on such flights to request an aisle or window seat without charge. British Airways please note.
Posted by Roger Bray at 08:34 No comments: 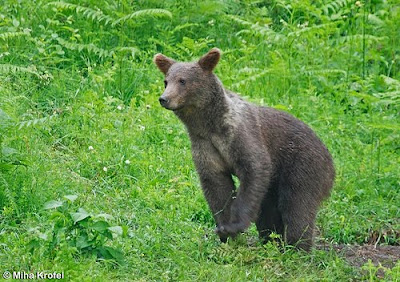 Watch brown bears in Slovenia - that's the intriguing offer from a specialist tour operator. Around 600 of them live in the south of the country. And that, says tour operator Just Slovenia, makes for a good chance of spotting them.

It is offering bear spotting excursions between April and August to guests staying at the Villa Lavanda, a traditional Slovene property on the outskirts of Fijeroga, an hilltop hamlet not far from the historic coastal towns of Koper, Izola and Piran, close to Croatia.

With a local guide, guests travel by 4 x 4 vehicle to an observation deck on a forested karst plateau. No children under 10 are allowed on the excursions.

The villa has two double bedrooms, a terrace and pool and is surrounded by vineyards. Prices for seven nights, including flights from Stansted, car hire, accommodation and bear excursion, start from £830 per person, based on four people travelling in June.
Posted by Roger Bray at 15:49 No comments:

Update (26 November, 2009) The CAA has confirmed it will appeal against the judgement reported below

Pressure for a change in the law on financial protection for customers if holiday firms which go bust has intensified with a landmark London court decision.

A Judge at Westminster Magistrates Court has ruled that on line company Travel Republic was not breaking the law by selling flights, hotels and other holiday components without an ATOL )air travel organisers licence).

Under existing regulations, firms selling packages must take out ATOLs, to ensure customers do not lose money if they go under. The issue before the court was one which has long vexed the travel business and its regulators: what exactly constitutes a package?

District Judge Nicholas Evans ruled Travel Republic was not selling packages as currently defined by law. The firm's customers were free to book a flight or a hotel room from its website or go away and try to find a better deal on either – or both – somewhere else.

He said the Civil Aviation Authority, which brought the prosecution, had failed to prove Travel Republic offered or sold anything other than separate components. Nor had it satisfied him beyond reasonable doubt that the company had made available - to any of the customers named in the charge - flights which qualified as components of packages.

The problem underlying this case is that the present law, drawn up almost two decades ago, is designed to cover traditional, pre-arranged brochure based package holidays sold direct or through bricks and mortar High Street travel agencies. The spread of on line availability, which has prompted more and more holidaymakers to use web sites which allow them marry flights and accommodation a la carte has rendered the law partly obsolete. One area of contention is low cost airline sites where passengers can click through from a home page and book extras – not just hotels but other important service such as car hire. Many observers think such arrangements should always be covered – as they are if you select a flight plus hotel on British Airways' home page, for example.

ABTA ( Association of British Travel Agents) has already proposed a “flight plus” regulation designed to solve the problem. The travel industry is about to embark on a consultation which may persuade the Government to update the law. At the same time the EU is looking at revising the rules which led to present law being enacted. As a result of all this the regulations may be changed to get ride of the requirement that a package must pre-arranged and sold at an inclusive price.

In his decision the Judge noted: “I sense there is a widespread view, held throughout the travel industry, that the current regulations are unsatisfactory”.
Posted by Roger Bray at 13:06 1 comment:

The Government should charge air passenger duty on a per plane basis - and sort out the absurd geographical anomalies which mean travellers to the Caribbean pay more than those flying to Los Angeles.

That was just part of a shopping list presented to MPs and Peers at the House of Commons yesterday by Peter Long, chief executive of TUI Travel - which owns Thomson and other tour operating brands.

Long, travel industry elder statesman, also called for the scrapping of next year's planned, further rise in APD and argued that the higher rate should not be applied to premium economy passengers - such as those flying in BA's World Traveller Plus cabin.

Turning to financial protection for consumers he urged Ministers to extend the ATOL (air travel organiser's licence)financial safety net to all passengers buying through interest or High Street retailers - or clicking through to accommodation sites after booking flights.

None of this is without self interest. Package tour charters generally fly fuller than scheduled services. And your operators don't see why they - or their passengers - should have to fork out to support the financial protection system when others get away without contributing.

But he makes perfect sense. Charging APD per plane encourages efficient burning of fuel. There can be no argument that the banding system, based on the distance of a capital city from the UK, badly needs revising (there was some hope this week that the case of the Caribbean islands, which consequently fall into the same band as whole of the US and Canada - including their West Coast cities - might be resolved by the Government. I will not repeat my earlier tirade against the imposition of the higher APD rate on premium economy passengers, which remains grossly unfair.

So far as the ATOL system is concerned there it looks likely the issue of gaps in the protection net may be addressed in a consultation paper due soon from the Department for Transport. Other voices, besides Long's, will then be added to the chorus of support for reform.

The Government got its fingers burnt after last year's Excel collapse when it insisted travellers who were not covered by an ATOL should be repatriated along with those who were, leaving the Civil Aviation Authority - not with 100% success - to bill them for the special fares they agreed to pay at the time.

At a time when every penny counts, the threat that the Treasury might have to stump up after future collapses might just be enough to prod Ministers into action at last. Let's hope so.
Posted by Roger Bray at 12:54 No comments: