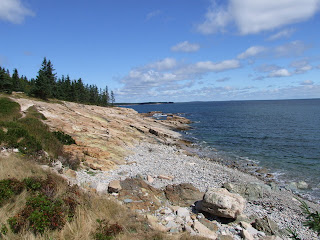 
“Acadia”, said the man who served us at the Ellsworth outdoor equipment store, “is a hikers' paradise”. As we climbed the Cannon Brook Trail on a brilliant late summer morning it was impossible to disagree.

The path wove back and and forth up the steep course of the brook, which danced and sparkled in the morning sunlight. Boulders provided stepping stones. Towards the top, where the water slid like molten glass over smooth pink granite, we rested on a rock shelf and lunched sumptuously on crab meat rolls, freshly prepared at a roadside sandwich bar on our way there.
Later we toiled up the south ridge of Cadillac Mountain, across a windy, rocky gradient where even the stunted pitch pine petered out, drinking in huge views of distant islands. On the crowded summit, feeling smugly superior, we mingled briefly with the sedentary classes who had driven up before picking our way down the east face.
Acadia is in the New England State of Maine. It was the first National Park east of the Mississippi. Linked by a bridge to the mainland it lies mostly on an Atlantic island shaped like a giant baseball glove. Its bare granite upper reaches prompted the French explorer Samuel de Champlain to name this body of land Mount Desert Island. Cadillac - in the nineteenth century a cog railway carried sightseers to the top - is the highest of its several mountains.


On Cannon Brook Trail
While the name Acadia comes from the French La Cadie, itself a corruption of a Native American trem meaning “the place”, Cadillac has a more curious provenance. Another early French arrival gave himself the phoney title Sieur de Cadillac, after a village near his former home in Gascony. His equally spurious coat of arms forms the basis of the crest which now adorns the bonnet of the eponymous, luxury car.
You can stay close to the main part of the park, in bustling Bar Harbor, for example with its many shops and restaurants. We chose to rent a property about an hour's drive to the north. The process of renting was remarkably smooth and although we harboured inevitable concerns that the images sent on line by its owners might have flattered to deceive, reality, if anything, proved the reverse.
Summer home owners in this neck of the woods, where early vacationers became known as “rusticators”, lean towards the diminutive. Thus the house was called a “cottage”, though it had five bedrooms, two bathrooms, an enormous downstairs sitting room. Separated from a well equipped open plan kitchen by a breakfast bar. And the lake on which it sat was a “pond”, though it measured some five miles by 1½. Shortly before we arrived, temperatures had hit record highs, soaring above 32C . so it was no surprise that the water was comfortably warm to swim in. 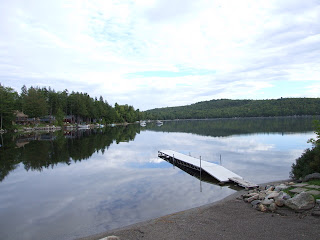 View from the house
Some mornings a resident pair of loons came by, handsome birds with coral eyes and chequered backs. After dark we heard their eerie calls and devilish chortling. Russet headed mergansers passed our private beach, leaping and and diving like dolphins. There was no light pollution. On a clear night the stars commanded awestruck silence.
The house was about 25 minutes from Ellsworth partly on some four miles of dirt road. Driving along it we often encountered wild turkey but while were assured there were black bear in the forest locals said they were rarely seen, and so it proved. It was so remote and tranquil that we tended to hurry back there after hiking, to drink chilled wine by the lake and cook on the gas barbecue. We bought freshly dug clams from a house by the road, steaming them until they yawned open, rinsing off the sand in hot water and dipping them in clarified butter. They were sweetly delicious.
But leaving Maine without eating at a lobster pound would be like visiting Cairo and ignoring the Pyramids. We settled on one at Trenton Bridge, near the park entrance. Diners queued to choose their live lobsters – small, medium or large - which were then marked with identifying numbers, bundled into stout rope bags and consigned to one of a half dozen steaming cauldrons of sea water, heated by wood fires. Some leading chefs argue that Scottish lobster is vastly superior to that caught in North American waters. Maybe, but these were hard to beat.
Do we have to go walking?
We walked outside the park, picking wild blueberries along the way, but it was Acadia which exercised the strongest magnetism. Its paths are richly varied and can be combined easily to suit each hiker's preference, or stamina. Some meander gently along the coast or by lakes. Others are steep and involve mild scrambling over rocks with occasional use of the hands. One demands a short ascent or descent on rungs set into the rock. In some difficult places boulders, heaved into new positions by the early trail builders, form improvised staircases.
Do not on any account miss the particularly beautiful Schoodic Point, on a separate offshoot of the park, where eider ducks bob in the swell off the granite slabbed shore. Save a clear day for it. Amble on a grassy track between apple trees and alder to where the path climbs and take it to Schoodic Head. It's only a modest 440ft above sea level but the grand panorama of mountains and island dotted Frenchman Bay make it seem much more higher. Paradise, you may decide, is no mere hyperbole.

How: We flew to Boston with Virgin Atlantic. The drive to Acadia takes around 5hrs so you need to overnight on the way and, ideally, on your return. September, after the main American summer holiday period ends on Labour Day, is a good time to go) The lakeside house slept up to ten though there were only four of us. It was rented through homeaway.com. This year it will cost $1600 (about £1070 - including tax) for a week in mid September. We also paid a refundable $250 security deposit.

The article first appeared in Scotland on Sunday's Spectrum magazine
Itching to post your own travel review - go to silvertraveladvisor.com