The best view in skiing? 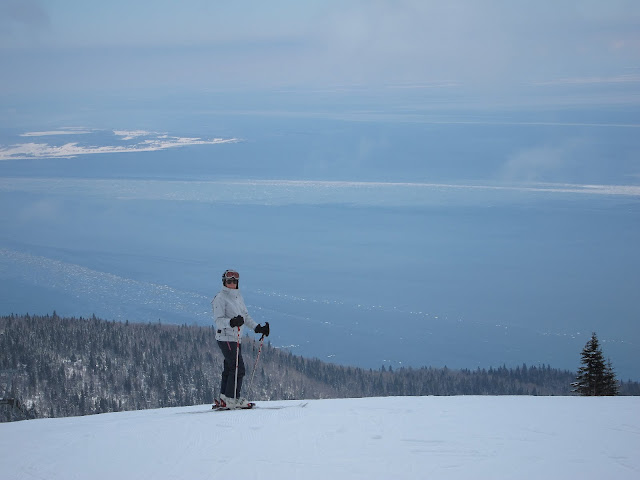 It's a view from the piste to match the world's most spectacular. From high on the ski slopes of Le Massif, in Canada's Quebec province, you can look down on the wide St Laurence River - blue in my pic to reflect a clearing sky and strewn with ice floes. Catch it at the right time and it is stunning. Click to make it bigger.
Posted by Roger Bray at 18:29 No comments: 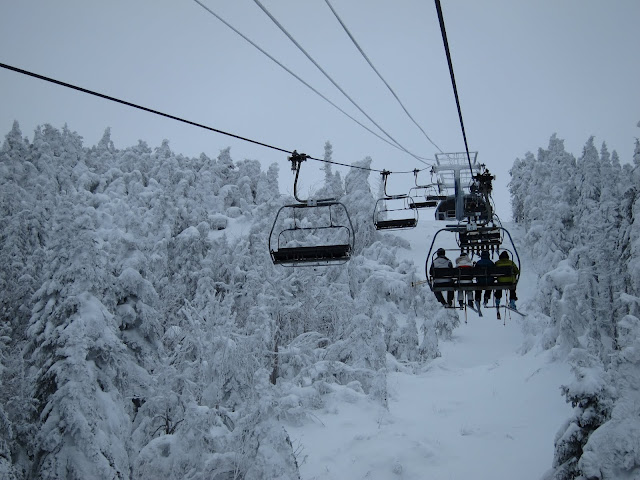 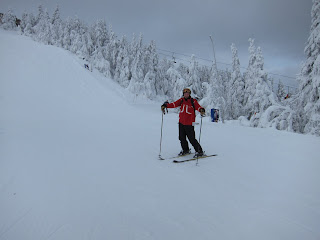 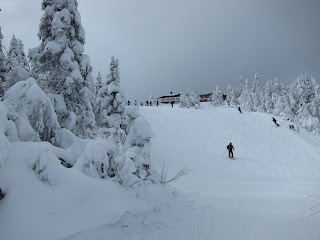 This is why we skiers love the mountains. The breathcatching beauty. Well - one of the reasons. Cold temperatures have kept the trees on the upper slopes of Quebec's Mont Tremblant laden heavily with snow this week. When the sun broke through weakly the contrast of blinding white against intense blue and the views of a frozen Lac Tremblant were stunning. The skiing has been excellent at times, particularly on the resort's black diamond runs on the Versant Nord - the north side of the mountain, which is about 1hr mins by road from Montreal. But there have been hard and sometimes icy patches to catch out the unwary. New snowfall has threatened, but storms have not set in, yielding instead a few frustrating flurries which have left a centimetre or two of snow in the village and on the pistes.
Posted by Roger Bray at 19:39 1 comment:

Surprising ignorance of the telelephone number to dial in emergency in the EU is revealed by new research. The European Commission found that only 13% of UK travellers knew to call 112. It's a free call and the same number works alongside nationals numbers, such as Britain's 999, in every European state. Available 24hrs reaches police, the fire and ambulance services, mountain rescue and coastguard. The Commission announced that British Airways, easyJet and other major transport providers across Europe have agreed to join an awareness campaign.
Posted by Roger Bray at 13:24 No comments:

New protection to ensure consumers are not left out of pocket or stranded abroad when travel companies go bust will come into force on April 30, the Government has confirmed. The so called Flight Plus rules are designed to reduce confusion among travellers over whether or not they are protected. They reflect the trend towards DIY holiday arrangements – piecing together flights, accommodation and maybe car hire to tailor make a package, rather than booking one straight from a tour operator's brochure. The Department for Transport has decided that if you request a flight booking and go back to a travel agent by close of play the following day to add a hotel or rental car, that will constitute a package for the purposes of the law. The rule will apply whether you book through a High Street agent or an on line travel agency. It ensures you are covered by the same safety net provided under the exisiting ATOL (air travel organisers' licence) scheme – so you get your money back if a firm goes under before you depart on holiday and you are brought home if it happens while you're away.
Posted by Roger Bray at 14:07 No comments: