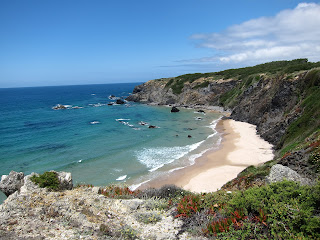 Rain swept in from the Atlantic. Ocean and sky merged behind a muslin curtain of low cloud, but the setting sun burned a hole in it, diffusing soft light, as in a Turner seascape. For diners in the little seaside resort of Azenha do Mar, in the Portuguese Alentejo region, it was dinner theatre. We watched from a window table, the spectacle diverting our attention briefly from a magnificent arroz de marisco, a rich risotto full of prawns, mussels and morsels of crab in cracked shells that gave the dish most of its powerful flavour.

Two days earlier we had paused at the same restaurant on a hike along the coast, to drink cold beers and snack on percebes, or gooseneck barnacles. Their odd appearance might deter the squeamish but, accompanied by with hot toast and butter, they seemed worth the risks taken by those who harvest them on wave pounded rocks offshore. Afterwards we had descended a steep cliff side with the help of a fixed rope to continue our walk past the former home of Portugal's most celebrated fado singer, the internationally feted Amalia Rodrigues, who died in 1999.

It seemed fitting she should have retreated here, to this wild coastline where, save in high summer when crowds from Lisbon come, you may walk for hours with only nesting storks and fishermen for company. Fado is a uniquely Portuguese expression of yearning, often about the life of the poor, and I had long nursed an image of the Alentejo as exactly the sort of place whose soul it reflected: a yellow landscape baked by fierce sunlight, dotted with black cork oaks, where arrogant and often absent landlords had paid miserable wages for labour until the 1974 revolution, when the workers rose up and seized many of their estates.

No doubt life there, even in those days, was a little more nuanced. The region has in any case changed significantly since, but not so dramatically that it is impossible to feel its recent history. 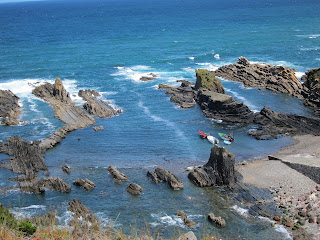 We had come to hike the newly signposted Alentejo section of the RotaVicentina long distance footpath*. British tour operators already offered holidays covering stretches of it, with baggage transfers between overnight stops, but this spring saw it completed and comprehensively signposted, making it easier to stay in one place and to dip in and out. It was pioneered by Casas Brancas, a group of enthusiastic accommodation owners and other tourism entrepreneurs whose common characteristic is individuality. The route splits into two - the Fishermen's Way running along the coast and the Historic Way swinging inland. It runs through the South West Alentejo and Vicentina Coast natural park, where new development is limited to the renovation of existing buildings. It makes for mostly moderate walking, with few uphill slogs, though some sections of the coastal path are not recommended to those suffering serious vertigo or real terror of steep drops. 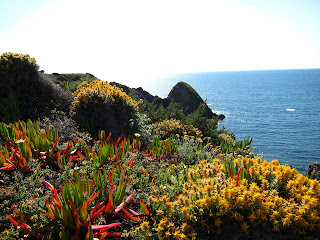 The coastal route is stunningly beautiful. It dodges inland from time to time but mostly it runs along cliff edges covered, especially during spring, in such a profusion of flowers you might think yourself in a landscaped rock garden: white and pink cistus, yellow and chocolate umbrella milkwort, lavender and Hottentot fig, an invader from southern Africa. There are empty, tempting beaches, though they are often inaccessible without a tricky, time consuming scramble. Sometimes the storks, nests perched on rock stacks, were so close that it was possible, with the naked eye, to see them feeding their young. 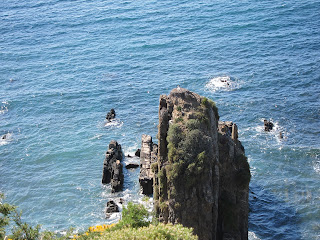 Inland the views are less dramatic and the odds against encountering other human beings even longer. Even a guard dog which came barking at us from a farm on the way from Sao Teotonio to Odeceixe seemed surprised, rather than angry, to see us. It is hoped the footpath may help breathe new life into this landscape. Some owners who were turfed out during the revolution have returned. Others thought the task of restoring their estates too daunting. That said, extensive tracts are given over to the production of high quality cork is produced from oak bark and plantations of fast growing eucalyptus are used make paper. 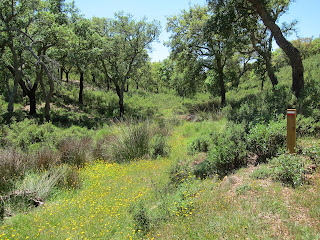 We walked through a great oak forest south east of Santiago do Cacem, a sizeable town at the northern end of the Rota Vicentina, which was previously an important settlement for Romans and Moors. Each trunk bore a number to show the year in which the bark had been stripped for cork. It takes nine years before the tree is ready again for exploitation. We stopped beneath one to eat a picnic of sandwiches made from the ubiquitous and very special Alentejo bread, still baked in wood fired ovens. Its shade as welcome, for even in May the sun was fierce enough to see why shepherds here wear distinctive, short sleeved tunics to protect their backs from its heat. 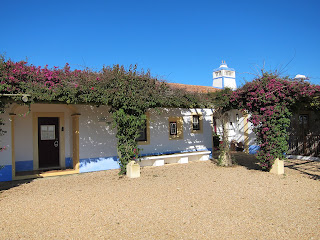 Our base was the Herdade do Touril, opened ten years ago on a beef cattle farm not far from the small seaside resort of Zambujeira do Mar. It has a lovely saltwater pool. Our room gave on to an elegant little patio. The hotel provides fine breakfasts but doesn't do evening meals. This is a mixed blessing. Sometimes, after a hard day's walking, you might not feel like venturing out again to a restaurant. You regret that unless you take taxis someone will have to drive, and thus forgo the full pleasure of the Alentejo's excellent and still under exposed wines. But then you would miss out on the wonderful Tasca do Celso in Vila Nova de Milfontes, which specialises in regional specialities, where I ate superb grilled sole - or a front row seat at Azenha do Mar, where the arroz and the drama outside were intoxication enough.

(This article first appeared in Scotland on Sunday's Spectrum magazine)

How: How: Roger Bray's trip was arranged by Sunvil Discovery(http://www.sunvil.co.uk/discovery/portugal/alentejo). He flew from Heathrow to Lisbon with TAP and picked up a rental car from Guerin and spending seven nights b&b at the Herdade do Touril. The firm can also arrange holidays there with a flight to Faro, which is about an hour closer. Casas Brancas is at www.casasbrancas.pt.