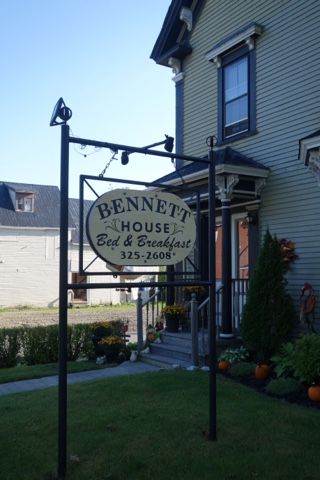 North America sometimes seems to be much of a muchness - all different and all the same, as colleague once put it. But now and then you stumble across a place with a character entirely its own. Such a town is Woodstock, New Brunswick.

The only reason we stoped there was its location, midway between the north side of Quebec's Gaspe Peninsula and our base  in Boston, Massachusetts. The two legs of the jouurnney south would take around 6hrs each. It's a big continent.

I  booked a night at the Bennett House, a b&b in Woodstock, wnich turned out to be an unexpected delight. Only about 20 minutes' drive from the US border,  it was New Brunswick's first incorporated town. It sits at the confluence of the mighty St. John River and its tributrary, the Meduxnekeag. There's a pleasant, traffic free walking, running and cycle path along the St John, where, ona gorgeous, musky September evening,  I was able to uncramp muscles barely used during the long drive.

The town is full of elegant, Victorian era buildings, of which the Bennett House is one. Built in 1878, it served first as a recory, then  as home and office of a  prominennt lawyer, as local headquarters of the Mounties - before being bought in 2005 and restored ("lovingly", of course) by Derek and Debbie Bennett. Their attention to detail, give or take a few concessiions to modern comforts, is extraordinary. A broad wooden staircase led to our room, one of four, which afforded glimpses of the main river beween rooftops and trees on the slope below. The floor was pine, the furniture in acceptable harmony wth the period. Besides a well equipped bathroom there was an antique wash basin, stand and jug, which were not intended for use) and early electric bedside lamps with engraved glass bowls, whichmost certainly were - and provided better reading light than many 21st century equivalents. Downstairs was a sitting room with a sailing theme, containing elaborate models including a beautiful replica of the Cutty Sark

We strolled  down Main Street for dinner al fresco by the Meduxnekeag. Breakfast included fresh fruit and eggs Benediict. We were informed it would be at 8.15 am (there was no choice), which was 7.15 am according to our body clocks since New Brunswick time is an hour later tan Quebec and the eastern seaboard of the US. Confusing or what?

Befoe we hit the Interstate again we took a spin around town, past lovely, wood  balconied houses, some with a faintly tired look.

If you fancy life in small town Canada - Woodstock's population is circa 5000,  the Bennett House is on the market. The asking pirce, at the current exchange rate, is jst under £140,000. Meanwhile, should you be passing that way, a supremely comfortable night, with  breakfast, will set you back a mere £50 or so for two. (I booked through booking.com)